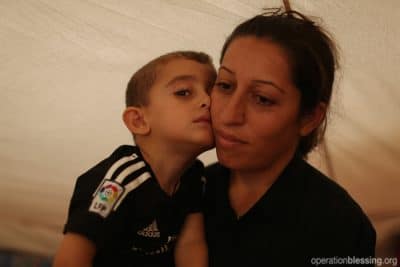 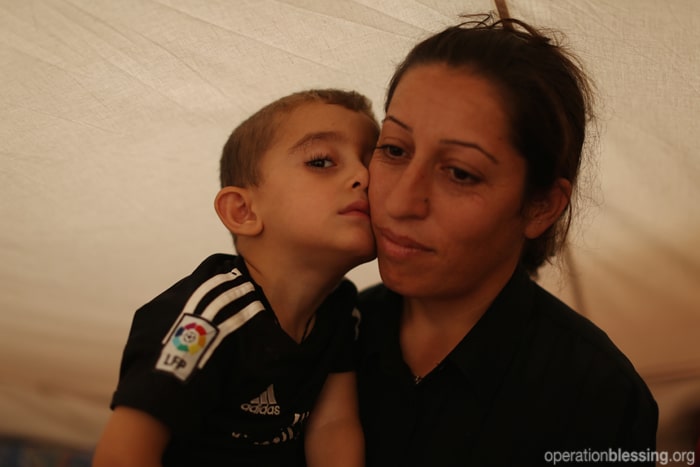 Operation Blessing’s vice president of international operations, David Darg, is on the ground in the Kurdistan region aiding Christians and other Iraqi minorities fleeing ISIS.

ERBIL, Kurdistan – Outside of her dusty tent—in a camp of 2,000 displaced Christians—a mother stared upwards at a cross, her face illuminated by the flicker of colored lights.

Miriam had found the piece of Styrofoam packaging in the trash, the arms were a little short, but it was as close to a cross as she could hope to find. It looked as though it could have been packaging from a DVD player, the lights were crudely taped around the edges and it was fixed to a pole by some rusty wire.

In her arms was her son, 3-year-old Yusef. He was coughing from a chest infection that was made worse by the cold desert night, as Miriam stood transfixed by the cross.

The cheap Christmas lights cycled through a pattern of flashes and slow fades, colors changing from red to blue, green to yellow. I watched her face, eyes wide with a huge smile as if she was watching a spectacular fireworks display. But she was just gazing up at a piece of discarded trash as if it was the most beautiful thing in the world.

I turned and stared at the cross, it was beautiful in meaning.

I asked her why she had erected the cross over her tent. She explained that many of the families in the camp had put up crosses to mark the Assyrian festival of the cross on September 13. Like the other families, she had decided to leave the cross up after the festival.

“When I look at this cross it gives me hope,” she said with a beautiful smile. I found myself having to restrain my emotions. I took a deep breath. Miriam had every right to be hopeless. 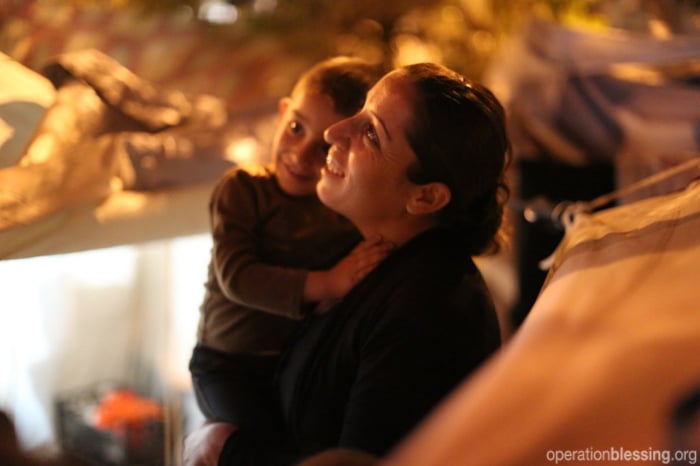 On August 6, 2014, Islamic State (ISIS) militants advanced towards her town, Qaraqosh. The residents there had heard reports of what was happening to the Christian minority in the nearby city of Mosul. Christian homes were seized and marked with a red symbol “N” symbolizing “Nasarin”—a term for Christians in the region. Militants would demand that Christians pay a tax, convert to Islam or die.

Some men didn’t get the chance to choose, many disappeared and were executed. Miriam’s cousin was one of those men.

Farther south in Tikrit, hundreds of men were rounded up, packed into trucks and taken into the desert where they were lined up and executed. Many of the wives and children of the dead men were raped, sold into slavery or both.

ISIS continued the spectacle of their inhumanity; it was a fate the residents of Qaraqosh didn’t want to wait for. Within minutes of hearing ISIS was approaching, Miriam’s family had grabbed a few belongings and fled for their lives to the Kurdish protected city of Erbil.

Now Miriam and her family of five live with 100,000 other displaced Christians and Yazidis in makeshift camps, church halls and abandoned buildings.

Miriam was less fortunate, her family only found a tent for accommodation. The inside of the tent was sparse, a few mattresses and some basic utensils. “We lost everything,” she said still staring at the cross. 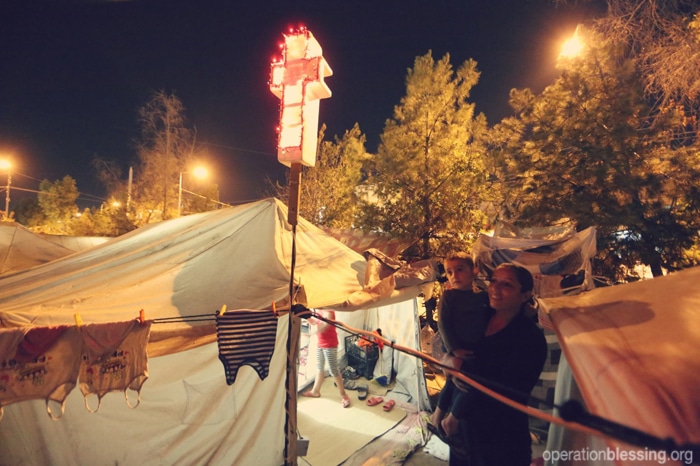 With reports of ISIS running rampant in Qaraqosh, looting and destroying homes, it’s probably true. Like most families, Miriam has no idea if they will ever be able to return to the town where her ancestors had lived and worshipped for over 1,000 years. She faces an uncertain future and in the meantime is dependent on relief supplies from organizations like Operation Blessing.

The trash cross is now her most valuable possession. Miriam asked little Yusef if he liked the cross, he pointed at the neighbor’s tent and said theirs was better, she laughed. We all stared up at the cross in silence for a little while. 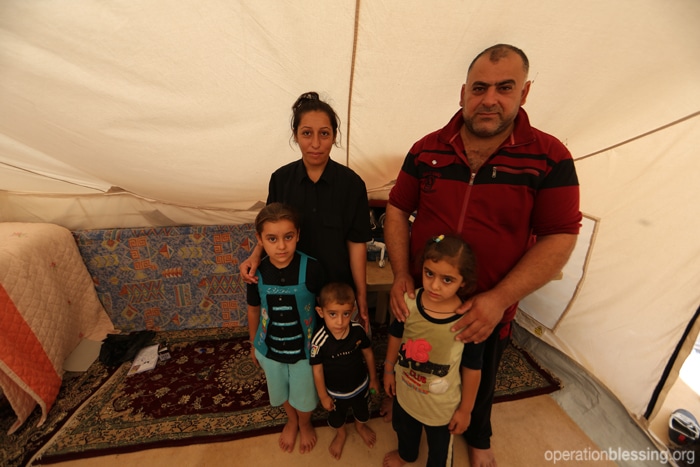 For me it was one of those profound moments where life was really put into perspective. There we stood just an hour away from the frontline of one of the world’s most violent conflicts, in a camp full of families who had witnessed unspeakable horrors and lost all their worldly possessions, but there was still hope. Miriam was persecuted and displaced because of her religion but still held tight to her faith.

It was a reminder to me that when humans are at their lowest point there is always a way to make a “trash cross” and find strength.

Whatever your religion or worldview is, no matter what you are going through, there is always a symbol of hope available even if it’s a piece of dirty Styrofoam, some Christmas lights and rusty wire.

Operation Blessing is on the ground in Northern Iraq, feeding thousands of displaced Christians and other minorities with distributions of food staples such as rice, noodles, tea, beans, lentils, powdered milk and more.

Teams also served meals to a camp of 2,000 refugees that included fresh foods like eggs, yogurt and cheese, and are delivering stoves, blankets, diapers and truckloads of critical supplies to camps set up on public lands and in churches outside of Erbil. 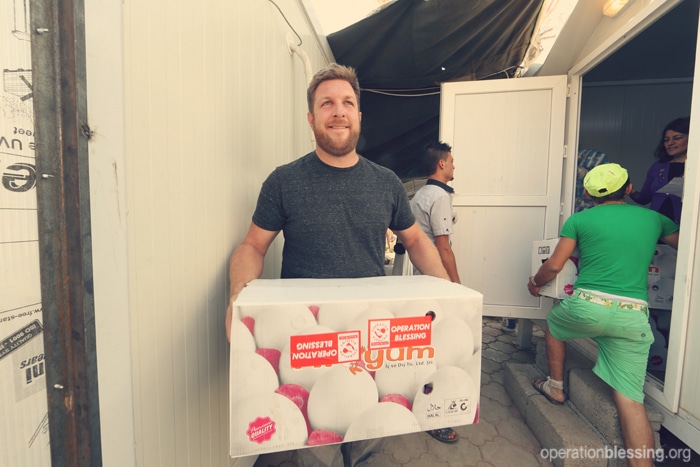 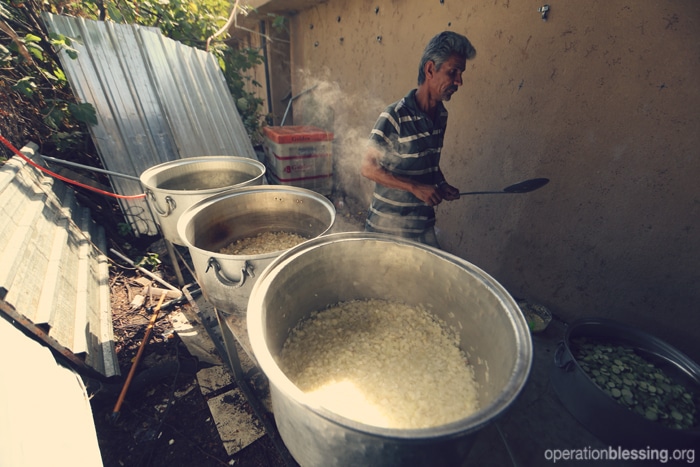 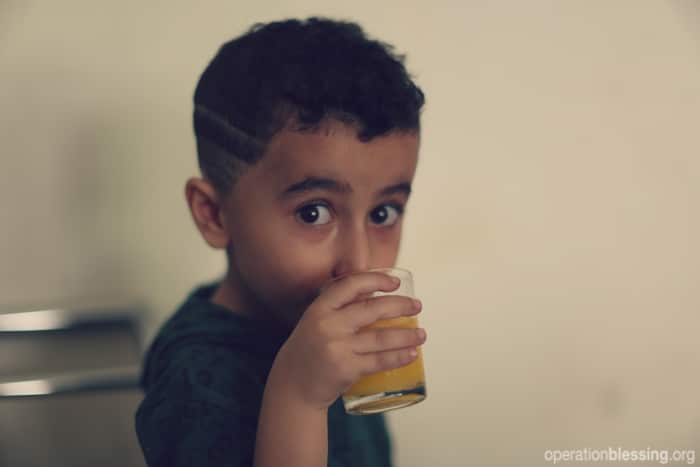 You Gave Masks to Local Hospitals During the COVID-19 Crisis